BACKGROUND
The use of central lines for medical treatment is accelerating alongside an epidemic of intravenous drug abuse and opioid overdoses. Medical facilities are experiencing a dramatic need for safe and effective tools that inhibit the abuse of central lines by IVDU (IntraVenous Drug Using) patients and their associates.

PROBLEM
The risks for central line complications are especially high in persons who abuse intravenous recreational drugs because they often use their central line to self-inject harmful drugs. Doctors frequently decide to keep patients with central lines in the hospital when they could otherwise send them home because of the concern that patients will abuse the line, resulting in dangerous infections or drug overdoses. Hundreds of millions of dollars in unnecessary medical expenses are a consequence of keeping patients with central lines in hospitals when they could be receiving their therapy at home or other care facilities.

SOLUTION
Neuma Innovations has developed the Central Line Protection Clamp to deter and detect the purposeful abuse and accidental errors that endanger the millions of patients with central lines inserted annually. 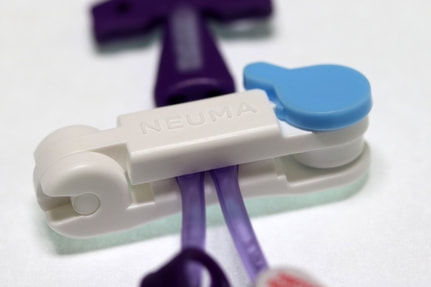 THE NEUMA CATHETER SAFETY CLAMP
The Neuma Clamp deters central line tampering and detects when it has occurred.

​The product is a single-use plastic clamp that snaps onto a PICC and other types of central lines in such a way that prevents patients from using their lines to self-inject illicit drugs.

When a nurse has completed an infusion, s/he snaps a Neuma Clamp on the line. At this point, the line is protected from unwanted flow and tampering. Because it is a single use device, if the patient removes the clamp to self-inject drugs, the clamp cannot be put back on the line and thus provides physical evidence that the patient has tampered with the line.

The Neuma Clamp is protected by US patents.